(Remember, you can always catch up here if you’ve missed any email in this series)

It’s time to introduce you properly to Billy Broas, its founder and lead instructor.

It’s important to know the man behind the curtain because this program isn’t just a bunch of general marketing advice. Billy will teach you the particular method and system that has emerged from his decade-plus experience in the online education industry.

My business partner David Perell (who also hired Billy as his marketing advisor, at my recommendation) once summarized how I work with people: “You vet them thoroughly, but once you decide they’re credible, you do whatever they tell you.”

That’s exactly right. There is an element of trust in any mentor relationship. You have to take action before you know it’s going to work. You have to lean on your trust in that person in the meantime.

So who is Billy Broas?

He studied Integrated Science and Technology in college, and his first career was as a consultant at an engineering company. He even co-authored a book on sustainable biodiesel and another one on beer brewing (NERD!).

This is important because the world of online marketing is filled with hucksters – one-dimensional, shallow personalities looking to make a quick buck.

Billy and I have connected over our intellectual interests and passions for technology, sustainability, education, philosophy, and philanthropy. He isn’t someone who is in it just for the money, which is why he chooses to work with writers, intellectuals, teachers, and creators who are similarly in it to help others.

Second, he’s been through the experience himself.

One of the things that initially attracted me to his thinking was that he had built, scaled, and eventually sold his own online business, in which he taught home beer-brewing.

It was immediately apparent that he wasn’t lecturing from an ivory tower of theory. He’d been in the trenches. He knew what it was like when you’re at your wit’s end, and there seems to be no way forward.

Besides his own experience, he’s worked with online business owners in more than 50 different niches for more than 10 years. He’s like an encyclopedia of knowledge about what works, what doesn’t, and what other instructors have tried.

It’s so easy and dangerous to get stuck in your own bubble as a business owner. We often don’t naturally connect with our peers and learn from their experience. Billy acts like a bridge connecting you to the wider world of online educators and knowledge entrepreneurs where so much is being learned every day.

Third, Billy is a marketing craftsman.

He doesn’t treat marketing as a cold, utilitarian thing. He’s interested in the craft of marketing. In the artistry of building a world for your audience – a world where they are empowered to reach for their dreams and given the tools to actually grasp them.

I had no idea that there could be so much soul in marketing. That it could be its own art form, with as much subtlety and skill and self-expression as any other medium. And it’s an especially sustainable medium, because unlike most others, it’s extremely well compensated. Once you have it as a skill set, you can take it anywhere and it will always be valuable.

This means he isn’t working with blinders on. He’s drawing from his broad life experience and from his deep study of the copywriting masters of the past to understand what works across time.

Fourth, Billy is a business coach.

It’s easy to find a narrowly specialized expert to teach you exactly what they know. But online education is so early and changing so fast, you really need someone who thinks about education holistically.

For example, there was a point when he advised me to focus on hiring an assistant as my top priority. He saw that until I took some of the responsibility off my plate I wouldn’t have time to implement anything else.

He introduced me to an assistant recruiting service, which he had used to find his own stellar assistant. Within a few months, both my business partner and I had hired full-time assistants through that service. They have transformed our business, taking on so much of the workload that was keeping us from more strategic priorities.

You want to work with someone who sees the big picture. Who treats you like a human with diverse needs and wants, not a sleepless content-creating machine. Who understands that the ultimate point of all this is to create flexibility and freedom, not results you can’t sustain.

Fifth and last, Billy is a true believer.

He was part of the second cohort of my program, way back in March 2017. Before I was well-known, before the Second Brain idea caught fire. He saw its potential and how important it would be for every knowledge worker to have a Second Brain.

The course had a tremendous impact on him, and his Second Brain became his “digital swipe file” of marketing ideas he could draw on anytime. It was immensely rewarding to see him take that idea and teach it to others as one of our coaches (which we call “alumni mentors”).

Billy is driven by a mission: to make the world’s knowledge accessible to more people. That mission has led him on a winding path to online education, to marketing, to the thinkers and creators of the Internet, and now to you and me.

“I love working with subject matter experts. They have such wide-ranging topics, and we always have such interesting conversations.”

I hope that’s enough of an introduction!

Billy has been my secret weapon over the past several years, and together we’ve sold more than $3 million worth of courses in that time, reaching thousands of people around the world. I’m so happy to give you access to his priceless knowledge.

Talk to you tomorrow, when I’ll share what sets Keystone apart from other marketing courses.

P.S. Billy and I will be hosting a Zoom session about Keystone on Thursday, October 6th at 10:30am PT. If you’re interested in joining Keystone, make sure to attend.

​Click here to register to join us on Zoom. 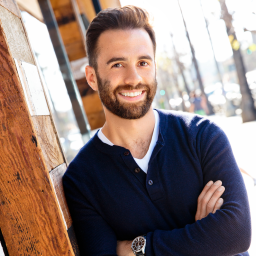 Meet Billy Broas, the creator of The Five Lightbulbs

Billy got into marketing in 2010, when he left his career at an engineering company to start his own business on the internet.

Since then, Billy has been the marketing brains behind some of the top online entrepreneurs and course creators. His clients include David Perell, Tiago Forte, Kimberly Snyder, and Ryan Deiss.

An introverted intellectual, and definitely not a "natural marketer," Billy saw an opportunity to create a tool for anyone who wears a marketing hat. Read more about Billy's story here.